The Story of Air Conditioning

If it hadn’t been invented, the modern world as we know it would simply not exist, it cools machines that make things for us, cools computers that run business, keeping medicine at the right temperature as well as providing comfort and much much more.

If every air conditioning unit in the world stopped right now one of the first things you may notice is that the internet would cease to exist and your mobile phones would stop working. The modern world would simply grind to a halt as all the machines and computers overheated.

For thousands of years, humans have been finding ways to keep themselves cool.

In 206BCE the 2nd-century Chinese inventor Ding Huan invented a Rotary Fan for air conditioning, with seven wheels 3 m (10 ft) in diameter and manually powered to cool a palace, then smaller versions became popular all over China. A rotary fan is the same type as what you might see on a desk or be hanging from a ceiling.

The first known systems that used water to cool indoor spaces were created by the ancient Egyptians, who lowered the temperature in their homes by hanging wet mats over their doorways. The evaporated water from the wet mats reduced indoor air temperatures and added refreshing moisture to the dry desert air.

Less than 200 years ago we made the discoveries that changed the modern world...REFRIGERANT.

In 1820, British scientist and inventor Michael Faraday discovered that compressing and liquefying ammonia he could cool air when the liquefied ammonia was allowed to evaporate.

1902 The father of cool was “Willis Carrier” who was on a train platform in Spring that year, he stared through the mist and realized that he could dry air by passing it through water to create fog, and with that thought in his mind by July 17th the same year he had installed the first modern full climate control air conditioner at Sackett & Wilhelms Printing Company, using water from a well backed up with an ammonia compressor his system had the same cooling capacity as melting nearly 50,000kg of ice per day, as well as controlling the humidity.

1928 Thomas Midgley, Jr. created the first chlorofluorocarbon gas, Freon, this then became the most common choice of refrigerant for comfort cooling and air conditioning was now commercially available.

There are many types of refrigerant today

If not handled correctly they can damage our atmosphere.

All refrigerants have a GWP number (GLOBAL WARMING POTENTIAL) which is how bad the refrigerant is if released into the air compared to Carbon Dioxide (CO2) which rated at 1. Releasing 1kg of refrigerant with a GWP of 1430 is the same as releasing 1430kg of carbon dioxide. A car holds around 1kg of refrigerant, re-gassing the car without fixing the leak does the same global warming damage as flying as a passenger in an aeroplane from London to Tokyo..!!

This is why our industry is now regulated and you have to make sure that the supplier you choose to for your cooling needs are certified with qualified engineers to handle refrigerants, as good practice they should also openly be able to demonstrate how they would manage your systems.

Check this out, modern air conditioning not only cools, they are very energy efficient heaters as well if installed and maintained correctly, in fact, they can give around £4 of heat for only £1 spent on electricity, which is good going when comparing it to most other common heating systems. 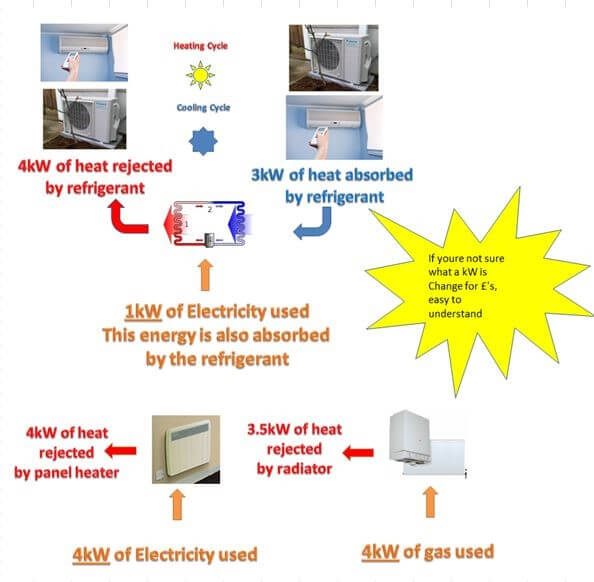 Hope you enjoyed reading the post. If you have any more questions, take a look at our FAQ's, call us on 0114 288 9911, or go to our social media account on Twitter at @askenergyian.